All questions are compulsory.

1- How does the electric flux due to a point charge enclosed by a spherical Gaussian surface get affected when its radius is increased?

2- Why are electric field lines perpendicular at a point on an equipotential surface of a conductor?

3- The EMF of a cell is always greater than its terminal voltage. Why? Give reason.

4- Name the physical quantity whose unit is J/T.

5- An heating element is marked 210 volt 630 watt. What is the value of the current drawn by the element when connected to a 210 volt DC source?

6- A beam of Alpha particle projected along +X axis experiences a force due to magnetic field along the +Y-axis what is the direction of the magnetic field?

7- A square loop of side 20 cm carrying current of 1 ampere kept near an infinite long straight wire carrying a current of 2 ampere in a same plane as shown in the figure.

Calculate the magnitude and direction of the net force exerted on the loop due to the current carrying conductor.

8- What is the direction of induced current in the metal rings 1 and 2 when current I in the wire is increasing steadily?

9- Why is the core of a transformer is laminated?

10- To which part of the electromagnetic spectrum disorder wave of frequency 3× 1013 Hz belong?

Four question number 11 and 12 two statements are given -one labelled assertion (A) and other labelled Reason (R) select the correct answer to these questions from the code (a), (b), (c) and (d) as given below.

c) A is true but R is false

d) A is false and R is also false

In a non uniform electric field, a dipole will have translatory as well as rotatory motion.

Reason(R) In a non uniform electric field, a dipole experience a force as well as a torque.

12- Assertion(A) :Electric field is always normal to equipotential surfaces and along the direction of decreasing order of potential.

Question 14 is case study based questions and is compulsory.

14- Faraday cage: A Faraday cage or Faraday shield is an enclosure made of a conducting material. The fields within a conductor cancel out with any external field so the electric field within the enclosure is zero. These Faraday cage act as big hollow conductor. You can put things into shield them from electric fields. Any electrical shocks the cage receives pass harmlessly around the outside of the cage.

i) Which of the following material can be used to make a Faraday cage?

ii) example of a real world cage is

iii) What is the electrical force inside Faraday cage when it is struck by lightning?

a) The same as the lightning

b) Half that of the lightning

d) A quarter of lightning

15- (ii) Draw the equipotential surfaces due to an electric dipole.

16- The network PQRS shown in the circuit diagram, has the batteries of 4 volt in 5 volt and negligible internal resistance. A miliammeter of 20 ohm resistance is connected between P and R .calculate the reading in the miliammeter. 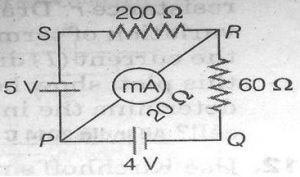 17- How is moving coil galvanometer converted into a voltmeter? Explain giving the necessary circuit diagram and the required mathematical relation used.

A coil Q is connected to low voltage bulb B and placed near another coil P as shown in the figure. Give reasons to explain the following observations.

i) The bulb B lights.

ii) Bulb B gets dimmer, if the coil Q is moved towards left.

18- Alternating voltage given by V= 140sin314t is connected across a pure resistor of 50 ohm. Find

i) The frequency of the source.

ii) The rms current through the resistor.

19- Name the electromagnetic radiation having the wavelength range from 1 nm to 10-3 Give its two important applications.

20- Derive an expression for the current density of a conductor in terms of the drift speed of electrons.

i) Why are the connections between the resistors in a metre bridge made of thick copper strips?

ii) Why is it generally preferred to obtain the balance point in the middle of the metre bridge wire?

22- An electron and a proton moving with the same speed enter the same magnetic field region at right angles to the direction of the field. Show the trajectory followed by the two particles in the magnetic field find the ratio of the radii of the circular path with the particles may describe.

23- What are Eddy currents? Write their two applications.

24- (i) Define self inductance write its SI units.

24-(ii) Drive an expression for self inductance of a long solenoid of length l cross sectional area A having N number of terms.

i) capacitive reactance of the circuit and

ii) The face of the current flowing with respect to the applied voltage.

Name the part of the electromagnetic spectrum which is

i) Suitable for RADAR systems in aircraft navigations

iii) Used as a diagnostic tool in medicine.

26- A hollow cylindrical box of length 1 metre and area of cross section 25 square cm is placed in a three dimensional co-ordinate system as shown in the figure the electric field in the region is given by E=50xi, where E is in N/C and x is in metre. Find

i) Net flux through the cylinder

ii) Charge enclosed by the cylinder.

27- (i) Explain the principle of Wheatstone bridge.

27-(ii) A battery of 10 volt and negligible internal resistance is connected across the diagonally opposite corners of a cubical network consisting of 12 resistors each of 1 ohm resistance. Use Kirchhoff’s rules to determine

a) The equivalent resistance of the network and

b) The total current in the network

28- Two long straight parallel conductor carry steady current i1 and i2 separated by a distance d .if the currents are flowing in the same direction ,show how the magnetic field set up in one produces an attractive force on the other. Obtain the expression for this force and define one ampere.

29- (i) Draw labelled diagram of AC generator and state its working.

ii) How is magnetic flux linked with the armature coil changed in a generator?

iii) Drive the expression for maximum value of the induced EMF and state the rule that gives the direction of induced EMF.

iv) Show the variation of the EMF generated versus time as the armature is rotated with respect to the direction of magnetic field.

30- In series LCR circuit is connected to an AC source. Using the phasor diagram write the expression for the impedance of the circuit .plot a graph to show the variation of current with frequency of the source, explaining the nature of its variation. Hence define the quality factor Q and write its role in the tuning of the circuit.

31- (i) Show that in a parallel plate capacitor, if the medium between the plates of a capacitor is filled with an insulating substance of dielectric constant K, its capacitance increases.

(ii) Deduce the expression for the energy stored in a capacitor of capacitance C with charge Q.

32- (i) State the two Kirchhoff’ laws. Explain briefly, how these rules are justified?

(ii) Calculate the steady current through the 2 ohm register in the circuit shown in the figure below :- 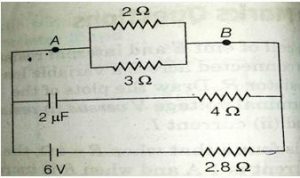