All questions are compulsory.

1- Which one of the following organism reproduce by binary fission?

2- Why Turner’s syndrome is a monosomy disorder.

3- Can you recall the two chemical differences between DNA and RNA ?

4- Name any one symbiotic organism which serve as a biofertilisers. Mention its role.

i) Tuber of sweet potato and potato

ii) Forelimbs of whales and bats

iii) Wings of mosquito and pegion .

6- (b) State the kind of evolution they represent.

7- Explain the two factors responsible for conferring stability to the double helix of.

8- A cross was carried out between two plants showing the contrast traits of heights of the plant . The result of the cross showed 50% of the parental characters.

i) Work out the cross with the help of punnet square.

ii) Name the type of the cross.

9- Name the functions of the following.

10- Differentiate between parthenocarpy and parthenogenesis.

11- Explain the role of flocs in sewage treatment plant.

12- Write the differences between wind-pollinated and insect pollinated flowers. Give one example of each.

13- Name the two end products of double fertilization in angiosperms. How are they formed? Write their fate during the development of seed.

14- Draw a sectional view of a mature anatropous ovule and lebel the following part in it.

i) That develops into embryo

ii) That develops in to seed coat.

iii) That develops into endosperm.

iv) Through which the pollen tube enters the embryo sac.

16- Why are human females rarely haemophillic. Explain. How do haemophillic patient suffer ?

Study the given pedigree chart showing the pattern of blood group inheritance in a family and answer the questions given below. 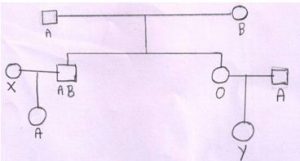 Give the genotype of the following –

17- A DNA segment has a total of 1200 nucleotides out of which 255 are adenine containing nucleotides. How many pyrimidine bases this DNA segment possesses.

18- Observe the given sketch and answer the given questions.

a) Name the A and B strands.

b) Mention the polarity of new strands.

c) Why A strand is discontinuous and B is continuous.

19- Describe the experiment that helped Louis Pasteur to dismiss the theory of spontaneous origin of life.

Explain the increase in number of melanic (dark winged) moths in the urban areas of post industrialization period in England.

20- Mention the name of the causative phathogens, symptoms and mode of transmission of Amoebiasis.

21- Give the full name of MOET. Explain its process and use.

22- Draw a labeled sketch of biogass plant and discuss its significance.

Differentiate between inbreeding and out breeding in cattle. State one advantages and one disadvantage of them.

23- Draw a labeled diagram of the antibody molecule and name the cell that produce antibody.

24- Explain the post fertilization events in the flowering plants.

25- What is organic evolution? Give the evidence based on, homologous organs, and Von Baer’s theory.

26- How did Harshey and Chase establish the DNA is the genetic material that transferred to next generation?

ii) Name the phenomenon that leads to situation like XO abnormality in human. Explain.

(b)Name the Harmon that are selected by hypothalamus.To which gland it stimulates?

What is innate immunity? Mention the natural barriers with suitable examples.